We’ve all read advice for parents who want to help their athletes reach great heights. Steadfast support – regardless of the score – is always the best approach, because it emphasizes a “person first, athlete second” mentality.

But how do you apply these best practices to archery? Here are 9 ideas to try, from a coach’s perspective – with a little help from the parent of an archery Olympian:

Really, actually, keep calm. And if you can’t keep calm, take a walk. But not far. Your archer needs to know you’re there, and most coaches and tournament organizers want you to be close by for encouragement, beverages and snacks. But the last thing an archer needs when looking at you for approval is a face tense with worry. If you look stressed, you reinforce the archer’s stress. That’s the perfect time to take a walk and get a cup of coffee.

Learn from the pros.

Not sure whether this approach works? Take it from Julie Nichols, mother of Olympic silver medalist and archery superstar Brady Ellison: “For me it has always been making sure he has what he needs at a tournament. Food, drink or whatever. I used to hover and tended to make him crazy. So now I just ask if he needs anything and am ready to get it, while trying to keep my nerves to myself. I feel it is important to be there for him but I take my cues from him and try not to intrude too much while he is competing. It’s taken a few years to get to this point. I guess my biggest piece of advice would be ‘Don’t Hover,’ but be prepared for any situation. Let your archer compete without questioning every shot or little thing you think is happening. Let them have fun. Let them make friends. Let them enjoy the sport.”

Well, sometimes it is the Archery World Cup. But for 99.9 percent of archery parents, it’s not. It’s a club shoot or a competition for pins. Or it’s practice, a meet or an interschool matchup. It might even be the state or national championships. Whatever the event, it’s a game. Yes, it’s important to your archer, and you love them enough to want them to succeed for the sake of their own happiness. But it’s still a game. Archers need this perspective from you: A win does not define them, just as a loss does not lessen their self-worth.

Get your own bow. 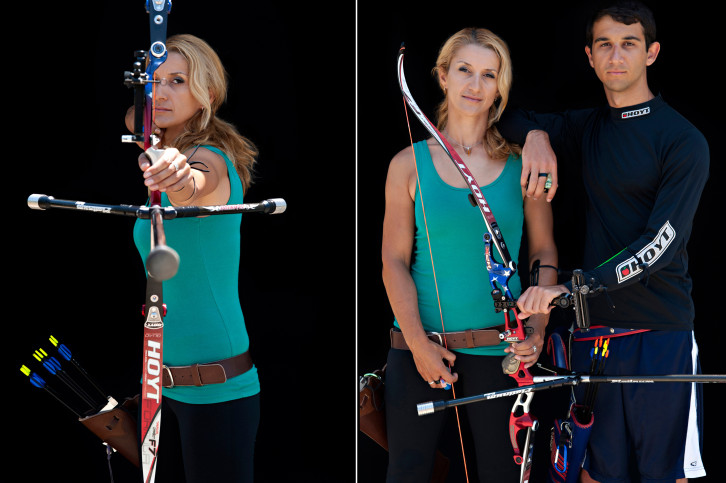 Khatuna Lorig isn’t “just” an Olympic medalist, she’s a mom – and shoots alongside her son, Levan, who hopes to make the Olympic Team, too.

We’re not kidding. You’d enjoy archery a lot more if you were behind the bow yourself instead of watching your archer shoot through binoculars (which isn’t a great idea, anyway – it implies expectation about their results in the target). Instead of being a spectator, why not join a local archery league and shoot together, or try Adult Archery Program classes? Not only will you enjoy all the benefits of archery that your child is getting; you’ll be able to relate to their archery journey, too.

Bribery: Does it work?

That depends on the archer. Some archers see incentives as a reason to work harder. In that case, rewards can be powerful motivators. A good example is linking the incentive to a process-based goal, such as improving a shooting technique. Incentives shouldn’t be tied to performance- or outcome-based goals, such as scores or finishes. When an incentive gets tied to rankings or scores, success can quickly fade away as the archer focuses on a prize instead of a process. Incentives can be super helpful, but only if they’re used appropriately for each individual.

“I love to watch you shoot.”

One of the best articles I’ve read discussed parents of successful athletes, and the attitude they shared. The article emphasized that parents simply said, “I love to watch you play” after a meet or match. They didn’t discuss scores, rehash each play, or ask their athletes why they made one decision instead of another. They consistently reminded the athlete that they were there to provide support and love. They aren’t there because they expected specific outcomes.

Yes, you’re paying for it. Yep, you’ve driven many miles to practices, tournaments and lessons. You’ve given up vacation time and income, and you’ve been there to see your child excited – and frustrated – about their sport. You feel ownership in what they do. You’re invested. But the goal – and I say this respectfully as a coach who wants to see every archer succeed – is the archer’s health and happiness. Every archer defines success differently.

Not every archer wants to become an Olympian or Paralympian. And not every archer should, even if they’re born with natural talent for the sport. They have to want it. There is no single factor more critical to an athlete’s success than whether they want this particular goal, and are willing to invest the time and effort. If they don’t want it, all of your wanting it for them will not matter.

Okay, maybe you can’t do trick shots like Dude Perfect. But can you play games with archery? Yep. Take your pick: exploding balloons that splatter water, glitter, flour, paint, whatever. Dinosaur targets. Zombie targets. Christmas tree ornaments. They’re all fun. How about obstacle courses? Or try shooting a floating ping-pong ball, novelty targets, field targets, 3-D targets, Olympic-style targets. How could you go wrong? And think music while shooting, friends shooting together, a league night at the archery range. Anything that keeps practice fresh and fun is a great idea for shooting archery.

Ready to give archery a shot? Click here to find an archery store near you, or find your local club or coach.