Bow-wielding heroes Snow White and Robin Hood accompanied “Once Upon a Time” savior Emma Swan on a new mission Sunday night during the midseason premiere of this ABC hit. The show’s 100th episode transported viewers’ favorite heroes to the dreaded Underworld for “Operation Firebird.”

In December’s midseason finale, evil Rumplestiltskin tricked the “Once” heroes into imbuing him with dark magic, making him the ultimate “Dark One.” Even worse, Killian Jones (alias: Captain Hook, Emma’s bae) sacrificed himself in the process and was taken to the Underworld. Emma to the rescue!

After consulting with her mom and dad (Snow White and Prince Charming), Emma and the crew decide to rescue Killian from the Underworld. Unfortunately, the only one who knows how to get there is – wait for it – Rumple! It’s a good thing his motto is “Magic always comes with a price,” because Emma has the perfect price in mind!

Rumple is hiding his dark powers from his love interest, Belle (yes, Rumple is the beast to her beauty), so Emma blackmails him into helping her. With no choice but to accept Emma’s plea, Rumple opens a magic portal to the Underworld and summons a ferry.

The Underworld, however, is not what they expect. The smoky, red-toned, ransacked version of Storybrooke is a place for “those with unfinished business,” including previously banished villains Cruella, Peter Pan and Regina’s evil mother. And let’s not forget the king of the Underworld himself, hot-headed Hades! Will Hercules make an appearance in the future? We hope so! Bows are a prominent part of Greek mythology, so cross your fingers that he’s outfitted accordingly.

Although we’re still learning who’s in the Underworld and what the characters will face, we do know one thing: It’s dangerous! As Regina notes: “Every soul in this town has unfinished business, and chances are for a lot of them, we’re that business.” Which explains why Snow White and Robin Hood keep their bows in hand and quivers on their backs at all times.

In exploring the characters’ “unfinished business,” we get a glimpse into Regina and Snow White’s sordid past, and the many times Regina found herself at the end of Snow’s arrow. Surely that’s resolved by now. Regina has been on “team hero” for quite some time, but maybe their past is more entwined than we realize. 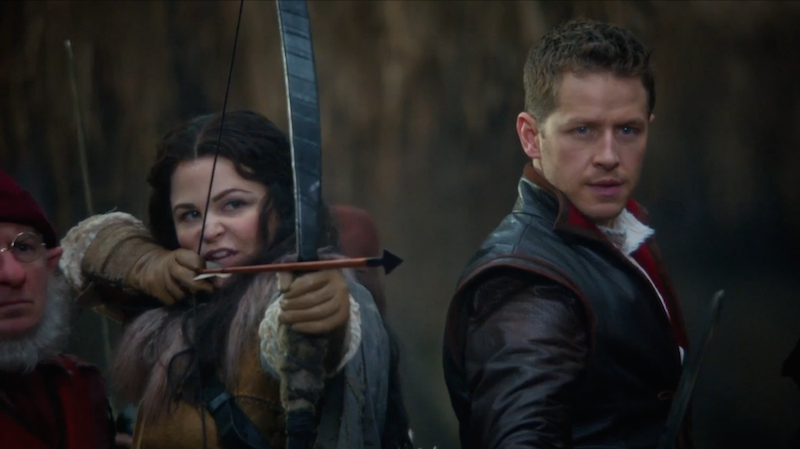 Amy Manson confirmed archery princess Merida’s return, and “Once” writers hinted at appearances from Mulan, King Arthur and Regina’s evil stepsister Zelena. Plus, there’s the element of “a life for a life.” Translation: If Killian returns to Storybrooke, someone must stay in his place.

The Underworld is heating up, and we’re excited to see our archery heroes in battle. Watch them nock arrows and slay villains Sundays at 8 p.m. EST on ABC.