Tattoos are more popular than ever, and as archery keeps growing in popularity worldwide, bows and arrows are increasingly super-fashionable as body art.

Even so, archery-based tattoos have long been popular. The bow and arrow is one of history’s oldest pieces of technology, and common to every culture on Earth. There’s something to be said for displaying such a defining symbol of humankind on your arm. 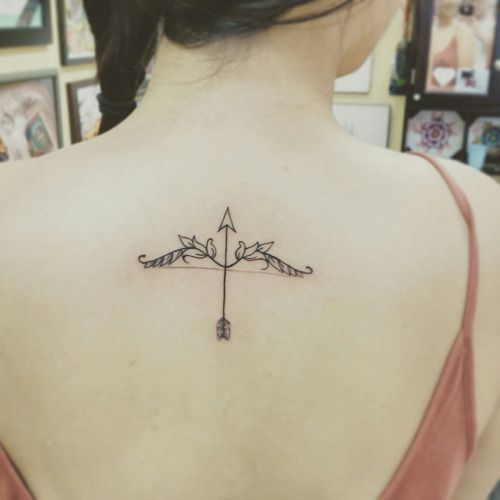 Tattoos are more popular than ever, and as archery keeps growing in popularity worldwide, bows and arrows are increasingly super-fashionable as body art. Photo Credit: prettydesigns.com A bow and arrow tattoo can symbolize strength and power, or a sense of direction: You’re moving forward without looking back. Photo Credit: TattooBlend

The meaning of bows and arrows can differ by person. For some people, bows and arrows represent Sagittarius, one of the zodiac signs. A bow and arrow can symbolize strength and power, or a sense of direction: You’re moving forward without looking back. A group of arrows symbolizes unity and strength. A bundle of arrows is tougher than one, of course. Another popular design uses more abstract, geometric arrows, like the awesome example below. Meanwhile, others prefer their arrows a little more ornate. We like this creative bow and heart arrow tattoo across two fingers. Share your love of archery with a bow and heart arrow tattoo. Photo Credit: Style Interest

You can also incorporate words into the design, like the cool tat below. Some people feature their family name within the arrow. Some people prefer their archery a little less symbolic and more figurative, like this beautiful picture of a huntress in black ink. This huntress tattoo is a figurative representation of bowhunting. Photo Credit: Spiritus Tattoo

Another type of tattoo is popular among a tiny number of archers: Olympians. It’s common for athletes representing their country at the Olympic Games to get a tattoo of the Olympic rings. These tats mark some of the proudest moments in the archer’s personal history.

Olympic archers often get their tattoo done on the outside of their forearm so you can see it as they shoot!

Khatuna Lorig (below) has competed in five Olympic Games, including two for Team USA in 2008 and 2012, and she won a bronze medal in Barcelona 1992. She has a full-color set of the Olympic rings on her right arm. Will she return for a sixth Olympics in Tokyo in 2020? Brady Ellison (below) has competed in the past three Olympic Games for Team USA, and already has two tattoos on his arm commemorating his appearances at Beijing 2008 and London 2012. “It’s one of the things you see all the cooler Olympians having,” Ellison said. “I feel like the Olympic rings is the one tattoo that only we can get.”

Ellison, who took home bronze and silver medals from the 2016 Rio Olympics, is planning a third tattoo to commemorate that Games. “It will go next to the other ones!” he said.

(If you want to start down the long road to becoming an archery Olympian, the best place to start is your local archery store). Brady Ellison is a three-time Olympian. He has tattoos commemorating the Beijing 2008 and London 2012 Games, and plans to add a third as a tribute to his performance in the Rio 2016 Games. Photo Credit: The Infinite Curve

Finally, how about something a little different? This acrobat surprises and delights. An acrobatic archer surprises and delights, both in person and in tattoo form. Photo Credit: Pinterest

We hope this gave you a glimpse of the world’s amazing range of archery tattoos.

One obvious reminder, however: Never forget that tattoos are for life. Make sure it’s something you want to keep forever, and don’t trust the job to an amateur. Seek a reputable tattooist, and study their work before committing. Be patient. You’ll find plenty of inspiration and tattoo artistry on the internet.

If you have some proud archery ink, let us know in the comments below!