Archery has taken many forms over the years through TV, books, movies and, more recently, a Japanese animation style called “anime.” These animated characters have wide-ranging archery skills, and we’ve found the top eight anime characters we would love to shoot with at the range. Of all the Sailor Scouts, we like Rei the most…obviously because she has the best attacks of all of them. Using fire to form a bow and arrow? Count us in!  Photo Credit: Sailormoon424 via Tumblr

In Sailor Moon, Rei is also known as Sailor Mars, a red-suited sailor scout in a group of supernatural female fighters. This character was in the “Sailor Moon” anime that ran from 1995 to 2000,with a couple of movies thrown in. Rei’s personality reflects her Sailor Mars power. She’s a hothead who easily goes into angry rages, and can sometimes be tough on others.

Sailor Mars often used fireball attacks to dispatch enemies the scouts faced. The Flame Sniper attack first appears in Sailor Moon Super S, episode 25 “Dreams of Her Own.” Using crystal power, Sailor Mars extends her hand and the Mars symbol appears, followed by a burst of fire. The fire transforms into a bow and arrow, and functions similarly to the physical weapons themselves. Mars then fires a flaming arrow that’s strong enough to destroy magical objects or weaken enemies. Pretty cool!

After InuYasha explains that she could be a great archer, she strives to become so. Her skills with a bow are pretty bad in the beginning, but like us, with a little practice she makes her way to never missing her mark! Photo Credit Alexis MacDonald via Pinterest

Kagome Higurashi is the main female protagonist of “InuYasha,” a popular animated TV series that ran from 2000 to 2004. She was born in modern Japan as a teenager, but then a yōkai pulled her into her family’s sacred well, taking her about 500 years back in time to the feudal era.

After Kagome meets the character InuYasha, she learns she was an archer in her previous life. Kagome decides to take the same path. However, compared to her previous self – Kikyō – Kagome’s archery skills are lackluster. Kikyō had been universally recognized as a supremely talented archer. Kagome’s shortcomings make us believe she would be a great partner for us beginners! Even so, Kagome’s skills save InuYasha several times. Near the series’ end, Kagome’s marksmanship improved to where her arrow rarely misses its mark. Talk about practice!

“Princess Mononoke” was a 1997 animated film by famed Japanese director Hayao Miyazaki. Ashitaka is a prince of the Emishi people, a once great tribe reduced to one village. A terrible demon shatters the village’s peace, and injures Ashitaka during their battle. The fight leaves the demon mortally wounded, but as it dies it reveals itself to be a powerful spirit—a giant boar that curses the Emishi with its last breath. It also reveals the wound Ashitaka suffered will kill him, too.

Ashitaka is a highly skilled archer, and displays his awesome talents during key points in the movie. Ashitaka travels through the countryside atop his red elk, Yakul, and discovers that his curse has also given him superhuman strength. Ashitaka makes that discovery while diverting attacking samurai from a nearby village. As the samurai start shooting arrows at him, Ashitaka aims and returns fire. As the curse starts to possess him, it also affects his shots. One of his arrows severs a samurai’s arms, and another arrow severs a warrior’s head! Good thing he’s on our side, right?

Uryū is lucky he doesn’t have to carry around a physical bow. He can form one with his spirit energy and Quincy Cross. Photo Credit: VIZ Media

“Bleach” is a manga (Japanese comic book) turned animated TV series. The series introduces Uryū as a classmate of the Soul Reaper Ichigo Kurosaki, who reveals himself to be a Quincy, a clan of humans destroyed by the Soul Reapers. Wanting to prove the Quincy are better, Uryū challenges Ichigo to see who can kill more Hollows, their enemy. But when Uryū and Ichigo are overpowered and start working together, they get to know each other and become friends.

As a Quincy, Uryū uses their most common skill and power: a bow named Kojaku, which is made of spiritual energy. During the Arrancar arc, Uryū uses a new Quincy cross and a variant of his original bow called Ginrei Kojaku. Unlike his original bow, this bow is shaped like a spider web and  fires up to 1,200 shots at once. Throughout different story arcs, his bow continually upgrades. We wish we could shoot that many arrows at once! When you grow up not allowed to hold weapons, it only fuels the fire to practice when given the chance. That’s exactly what Yona has had to do to learn archery! Putting in the hours, day and night. Photo Credit: Alltheanime.com

Yona is the sole princess and heir of the Kouka Kingdom in the TV show “Yona of the Dawn.” Her mother was assassinated when Yona was young, leaving her to her kind and loving father, Emperor II. During her 16 years, Yona grew up without a care. She never knew strife or unhappiness except her mother’s death. That made her oblivious to her country’s affairs, and even to the palace’s happenings.

She begins practicing with the bow and arrow, first with Hak and then Yoon as her teachers. Although a beginner at first, Yona practices daily (and secretly each night), and eventually can fire 200 arrows in one session. Her aim also improved to where she can kill animals with one shot. Sinon slowly got over her fear of guns. She then moved on to the better option, an awesome bow! Photo Credit: Aniplex

“Sword Art Online” is a series of light manga novels and an animated TV series. Shino Asada appears in the TV series “Sword Art Online II,” and in the series’ fifth novel, “Gun Gale Online,” as her sniper username “Sinon.” When she was 11, Shino was involved in a post-office robbery, and accidentally killed the armed robber. As a result, she developed a fear of guns, and played “Gun Gale Online” in hopes it would end her trauma.

When she met the hero of SAO, Kirito, she joined him and his friends to play “ALfheim Online.” That’s where she obtained her new weapon, the bow and arrow. As a great sniper, she is also a fantastic shot with the bow at long range. 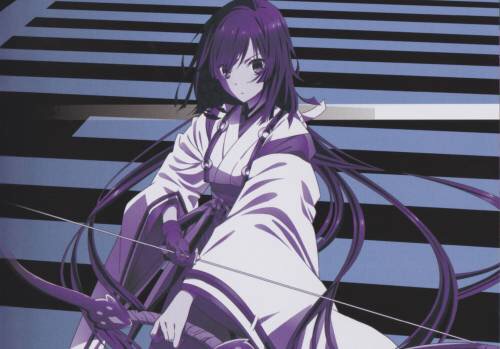 When you’re the reincarnation of a very famous ancestor, you need to hold up to that name. Natsume does just that while firing a bow! Photo Credit: Funimation

“Tokyo Ravens” debuted in 2010 as a hit animated TV series. As heir to the main family of Tsuchimikado, Tokyo Ravens bore the burden of the family’s name since birth. Further, she is the presumed reincarnation of their famous ancestor Yakou, otherwise known as the King of North Star. With such charisma, she is envied by other Onmyoujis, otherwise known as shamans. Natsume heads the main family, so while attending school she must dress and act as a man. This leads to funny interactions between friends and classmates as she tries to learn while keeping her secret.

Natsume ranks among the most skilled Onmyoujis in Tokyo. In fact, no one in the academy can best her in sheer skill. Magic is dominant in the series. Even though Natsume has magical powers, she also shows incredible archery skills during the first few episodes. She uses her bow, along with a few magical effects, to take down her enemy. Teach us how you make magic arrows, Natsume! This astral servant is one awesome shot. Archer has plenty of moments where he is shooting at a target farther than a couple miles away! Photo Credit: Tokyo MX

After starting as a Japanese visual novel, “Fate/Stay Night” (Unlimited Blade Works) became a manga adaptation from 2005 to 2012. In the adaptation, seven human Magi were locked for centuries in an epic struggle for the Holy Grail, which can grant its owner every wish and absolute power. The Magi enlist the help of astral spirits called Servants, the spirits of legendary heroes whom the Grail has given flesh. The Servants exist on an astral plane and accompany the Magi. When necessary, the Servants can be summoned as material beings and forced to fight each other. The ultimate winner will get the grail and become master of the universe.

Archer is one of these Servants, and can wield a bow and shoot amazing distances. However, he usually only fires from a standing position, so that might be this hero’s limit. Either way, Archer is incredibly accurate and takes out enemies in no time flat.

Which of these characters is your favorite? We can’t make them appear in real life, so watch them on channels like Hulu, Netflix and Crunchyroll. Meanwhile, let’s hone our own skills between episodes! Check out archery equipment, get some instruction, and find a place to shoot near you with our store locator!

“The Ranger’s Apprentice” is a Must-Read for Archery Fans

What Do Archery, Samurai and "Star Wars" Have in Common?