The backbone of archery technique is correct shooting posture. Correct posture helps your body work efficiently with your bow, which helps you shoot with consistent accuracy. If you’re new to archery or you’re struggling with consistency, you might need to evaluate your shooting posture. Let’s look closely at the components of proper archery posture, and some common mistakes to avoid. The closed stance is where the shooters feet are slightly staggered with the front foot ahead of the rear and the hips closed to the target. Photo Credit: USA Archery.

Foot position provides the foundation of proper shooting posture. You can try a few variations, but all require the archer’s feet to be roughly shoulder-width apart with knees slightly bent. A neutral stance keeps the archer’s feet even with each other, perpendicular to the arrow, and hips parallel to the arrow when at full draw. A closed stance slightly staggers the archer’s feet, with the front foot ahead of the rear and the hips closed to the target. The open stance slightly staggers the archer’s feet, but the front foot is behind the rear foot and the hips are open to the target face. Which shooting stance is right for you? It’s your preference. Try shooting from all three positions, and choose the one that feels most natural. This is an area of archery posture where incorrect form is often seen. Some shooters will lean forward aggressively into the shot while others, often novice archers, will lean back. Photo Credit: USA Archery.

Inconsistencies in your torso’s position can dramatically affect your shots and their consistency. Proper posture requires the archer’s torso to be straight up, with the collar bone parallel to the arrow. Your hips shouldn’t bend forward or backward, or into or away from the bow. Also, your torso should not bend left or right, which causes you to lean into or away from the bow. This is an area where archery posture often goes awry. Some archers lean forward aggressively into the shot while others, often novice archers, lean back. Leaning away from the target and bow is sometimes caused by shooting a bow with too long of a draw. If you think your form is suffering from this issue, visit an archery shop to ensure your bow fits you. A good head position is one that you can repeat many times for consistency. Photo Credit: World Archery.

Once you’ve found your ideal stance and your torso is properly positioned, hold your head up straight, with your chin level to the ground. With your head fixed in this position, turn your face downrange. Your head is now positioned properly. The bow arm shoulder, or front shoulder should be in a natural position. When the shoulder is down and pushed toward the target, you can easily control more of the shot. Photo Credit: USA Archery.

The shoulder on your release arm should fall into position naturally when your elbow and lower arm are properly placed. Your bow arm’s shoulder, however, is more prone to manipulations and inconsistencies. The bow arm’s shoulder, or front shoulder, should be in a natural position. One common mistake is to shrug this shoulder backward into the torso, causing a high shoulder; or overextending it forward, causing an excessively low shoulder. An extended front shoulder is often caused by shooting a bow with too long of a draw. The release arm elbow should be pointed straight away from the target with the forearm running parallel to the ground. Photo Credit: USA Archery.

The elbow on your release arm should point straight away from the target, with the forearm parallel to the ground. The elbow on your bow arm should point at an outward and slightly downward angle away from the bow. When correctly positioned, the bow arm’s elbow has a slight bend. By correctly positioning the bow arm’s elbow, the bow hand also positions itself properly, with the thumb at roughly a 45-degree angle. A frequent mistake is to point the bow arm’s elbow directly downward. That can cause the bowstring to slap your forearm during the shot. That can also put your thumb in a vertical “thumbs-up” position, making it difficult to grip the bow correctly. 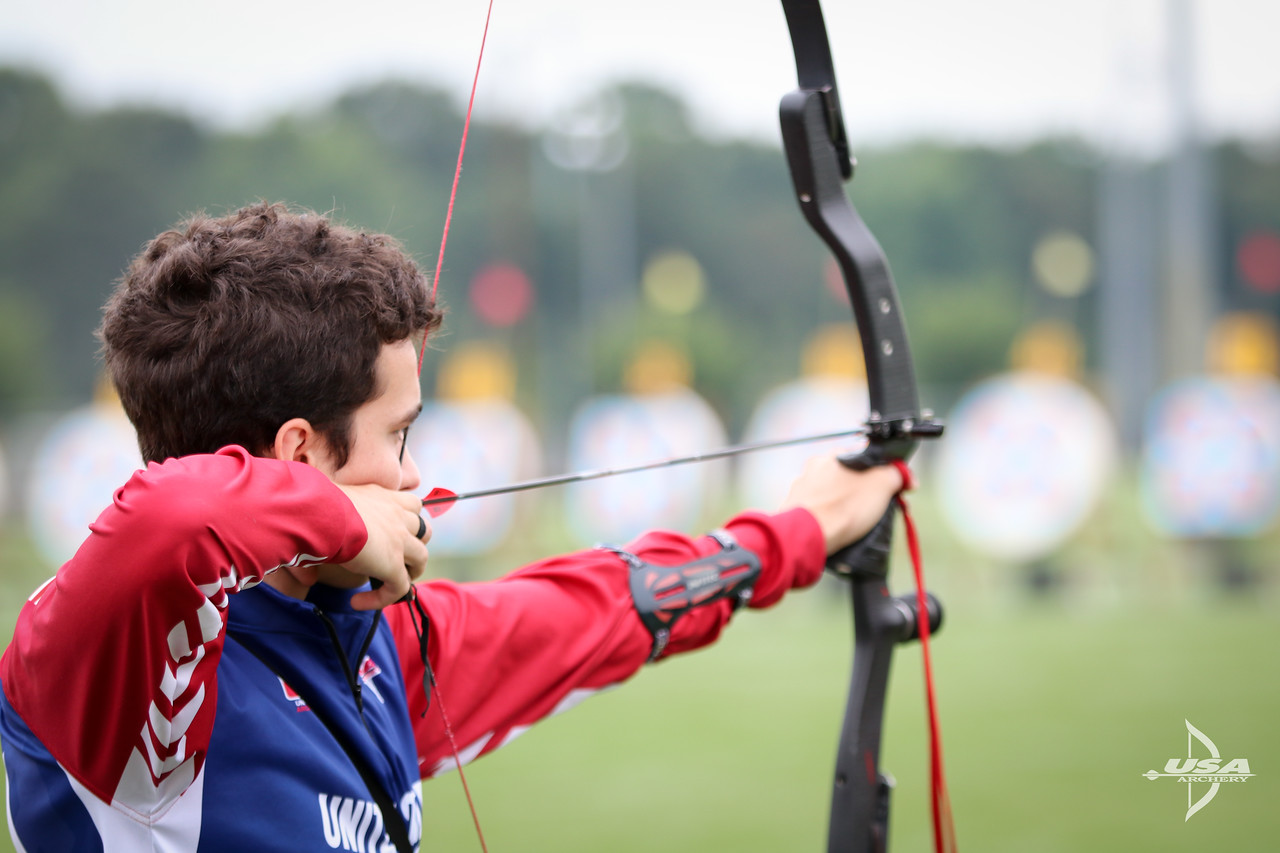 Anchor point can vary from one archer to another depending upon face shape and release type but when it comes to anchor point consistently holding at the same point shot after shot is what’s most important. Photo Credit: USA Archery.

The anchor point is the last component of correct archery posture. Recurve shooters typically anchor the bowstring under their chin or in the corner of their mouth. Compound-bow archers typically anchor along or behind the jawbone. Anchor points vary by archer, depending on their face’s shape and their release type. What matters most is finding a natural anchor point and consistently holding there at full draw, shot after shot.

Use these guidelines to ensure your archery posture is good. To confirm your posture or recognize problem areas, make a video of yourself shooting and examine the footage. If you still struggle with any aspect of your posture, find a nearby archery coach for expert analysis and feedback.