The “Olympic recurve” is the type of bow Olympians shoot. It’s also the bow of choice for thousands of recreational archers who like a fantastic, challenging discipline.

In addition to the Olympics and just plain fun, these bows are used in 3D, target, indoor and field archery. In outdoor target tournaments, including the Olympics, adult archers shoot targets at 70 meters. To shoot that far accurately, Olympic recurves use accessories that differ from those on other recurve bows. Olympic recurve bows have three main pieces: the riser and two limbs. The bow quickly disassembles for travel, or to switch to heavier or lighter draw-weight limbs. The riser includes the bow’s grip. The riser also includes mounts for sights and the arrow rest.

The limbs generate the bow’s power when bending in unison as you draw the bowstring. When you release the bowstring, the limbs snap forward, releasing the limbs’ stored energy to propel the arrow to the target.

If you look at an Olympic archer’s bow, you’ll also see long rods jutting out from the riser. These are stabilizers, and help steady the bow for precise aiming. 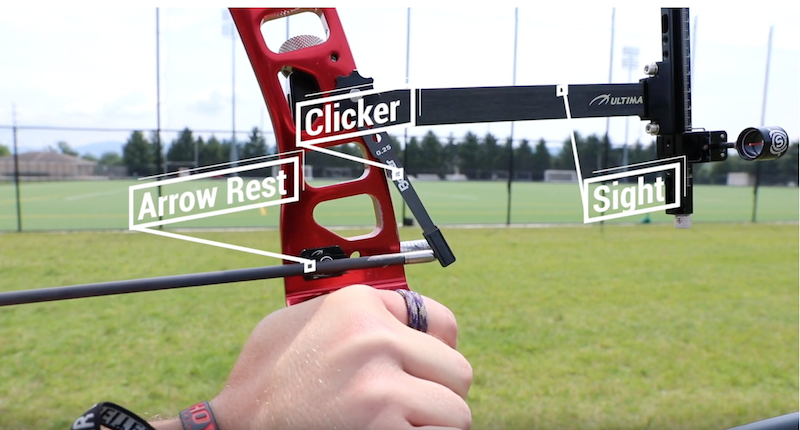 These additions help the archer aim and ensure that they’re pulling the bowstring back as far as necessary. Photo Credit: ATA

These bows also include a clicker, sight and arrow rest. A clicker is a “draw check” that clicks when the arrow is pulled to full draw. The audible click lets archers know they’ve reached full draw, and it’s OK to shoot, which ensures a consistent draw and release. The sight on an Olympic bow has fine adjustments, which increase aiming precision. The rest holds and guides the arrow as it leaves the bow.

Those accessories make Olympic recurves different from other recurve bows, like a barebow. Accessories might seem complicated and expensive, but the pros at an archery shop can help you assemble a complete setup that fits your budget. Find a nearby archery shop here.