An arrow’s length and weight, and the energy stored in bow limbs when fully drawn, help determine an arrow’s flight path.

Every archer requires a different arrow setup to maximize their performance. Arrows also perform differently based on how they’re set up for various tournaments and weather conditions. As archers explore what works best, many look carefully at how much of their arrow’s weight is located in its front half. That front-of-center weight, or FOC, is calculated as the percentage of the arrow’s total weight.

“It’s heavier in the front because you have a field point or broadhead that’s heavier than the nock and vanes,” said Matt Haas, FeraDyne Outdoors’ new-product design manager. “An arrow’s center of mass is not typically in the center. It’s scooted forward a little bit, and that’s where you get the FOC.” Here’s how to calculate your arrow’s FOC, according to Easton Archery:

To explain FOC, Haas notes that if you dropped a stick from an airplane, it would tumble uncontrollably toward the ground. But if you drop that same stick with a 10-pound ball tied to one end, that end will fall faster and the stick will drag straight behind it. That’s FOC.

“Most of the world’s best shooters are using a 9 to 12% front-of-center (arrow) for target archery, where accuracy is an absolute premium,” said Steve Anderson, the 2016 World Field champion and winner of several other major tournaments. Anderson is also Easton Archery’s pro-staff manager. Even though he’s an FOC expert, he doesn’t dwell on FOC values. “I don’t worry about having a certain percentage,” he said. “I like to experiment with different point weights, and see what groups the best.”

Moderate FOC ensures good arrow flight at any distance. At 3D and field events, field points weighing 100 to 120 grains are common. Anderson said most top archers use arrows with a moderate FOC. “If a lower front-of-center shoots and groups better for me, that’s what I’m going to go with,” he said.

“My advice is to play around with a little bit more FOC at indoor tournaments and less FOC for shooting unknown distances,” Demmer said. “For known-distance shooting, keep FOC somewhere in the middle.” 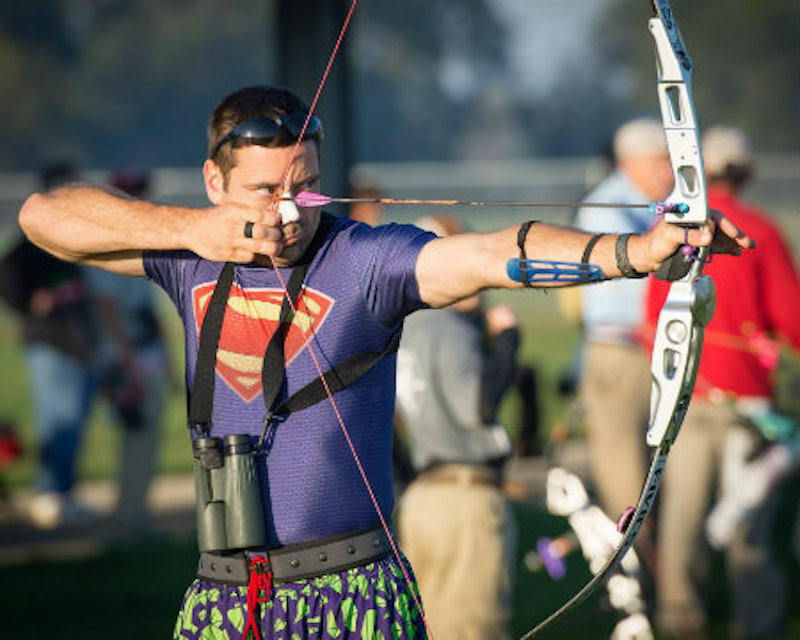 For 3D unmarked tournaments, Demmer’s arrows are 9% FOC, and his field arrows are 11 to 12%. Demmer said if the FOC is too high at an unmarked field tournament, the reduced speed and increased flex from added weight can hurt scores if you struggle judging distances.

But Demmer said a high FOC helps at indoor events, so those arrows usually have an FOC of 12 to 18%. Tournament rules also affect his FOC choices. When competing in USA Archery tournaments, which don’t allow string walking, Demmer uses an extreme FOC of 26 to 28%. “If I run a high FOC, the arrow points in the right direction quicker,” Demmer said. “I may get less-than-desirable arrow flight, but my arrows impact really well.”

The easiest way to determine which FOC works best is to experiment with different field points. Try shooting groups of arrows with field points weighing 100 to 300 grains. Lighter, lower-profile vanes/fletchings can also add FOC, while a wrap on the arrow’s rear can decrease FOC. “We just have to try to optimize the tools for the game that we’re playing,” Demmer said.

Archers might disagree about whether there’s an ideal FOC percentage, and how much FOC should factor into arrow setups, but everyone agrees archers must consider other factors, too.

“Learn how to properly execute a release, and you’ll get a lot more out of that than changing your point weight,” Anderson said. “Most people aren’t good enough to really tell the difference in FOC.”

Haas agrees. “FOC’s best application is fine-tuning the spine of your arrow,” he said. “People are starting to use it less as an in-flight tool and more to fine-tune the spine.”

If you have questions about your arrow setup, consult bow techs at your local archery shop for help.

How to Calculate Arrow Weight and Why

What Do Stabilizers Do?